Title/Author: From Aleatoric Machines To The Future Sounds Of Folk by Marc Chia

Bio: Marc Chia aka One Man Nation investigates spirituality in technology through the medium of sound and performance. Currently, he is co-directing The UnifiedField experimental art space which he co-founded with Marta Moreno Muñoz and developing The Future Sounds Of Folk in collaboration with STEIM.

What follows is a condensed run through of the various processes that have directed my research and practice over the past years, in search for my own narrative in relation to my sound/performance practice and the sounds of the post-folk.

Sun Ra Lives On In The Fiber-optics

Around 2007, after trying my hand at building various stochastic musical instruments based on simple deterministic and non-deterministic systems, I turned to streaming networks to provide the ever present instability and randomness to the instrument, mixed with an equal dosage of system overloads, the Bufferrrbreakkkdownnn Arkestra was born. Rather than playing notes, or triggering samples, I was playing the networks, by controlling the concurrent sending and receiving of 8 sine tones of different frequencies to and from 8 separate streaming servers, this manipulation creates fluctuations in the networks which in turn causes the computer to overload (as sometimes its trying to receive when the sending signal is cut temporarily) leading to the cacophonous rhythmic glitchfest that erupted semi-aleatorically. Sun Ra lives on – in the fiber-optics.

Putting The Soul Back Into The Electronics

As a musician whose main instrument is the computer, one of my early goals to to turn this unintuitive, intangible Pandora’s box into a legitimate musical instrument capable of being the medium in the transmission of my expression. By using a serial controller that has LEDs behind each of its 64 buttons (monome.org), I was able to finally do away with the computer screen altogether, this controller was augmented with a traditional midi controller that has piezoelectric elements installed into its guts to pick up all the subtle movements of faders and knobs. With this, I was able to put the incidental sounds which are inherent in all acoustic instruments back into an electronic music instrument.

Medium; Transmissions From The Aether

My solo sound/performance work as One Man Nation was described by Portuguese collective Soopa as a performance that transmitted a deep narrative feeling of geopolitical disenchantment, ingrained into dark textures. This disenchantment exists on more levels than purely narrative, it is exorcised by the use of every part of my body as a whole, that presence with the inclusion of the sounds produced by the intended or accidental gestures and physical actions – everything is technology making anything and everything potentially an instrument, a source of sound, a critique – the avoidance of a priori drawn ways, ontologically reinventing the possibilities of life, and as a living performer/artist, exploring all the possibilities in the here – in the now.

Since earlier mutations of the current performance, the goal has ultimately been to seamlessly mix different elements such as, but not limited to, computer/traditional/ritual music/processes, performance art and improvisation together into a cohesive piece that takes the end user into a state of intimate unreality. 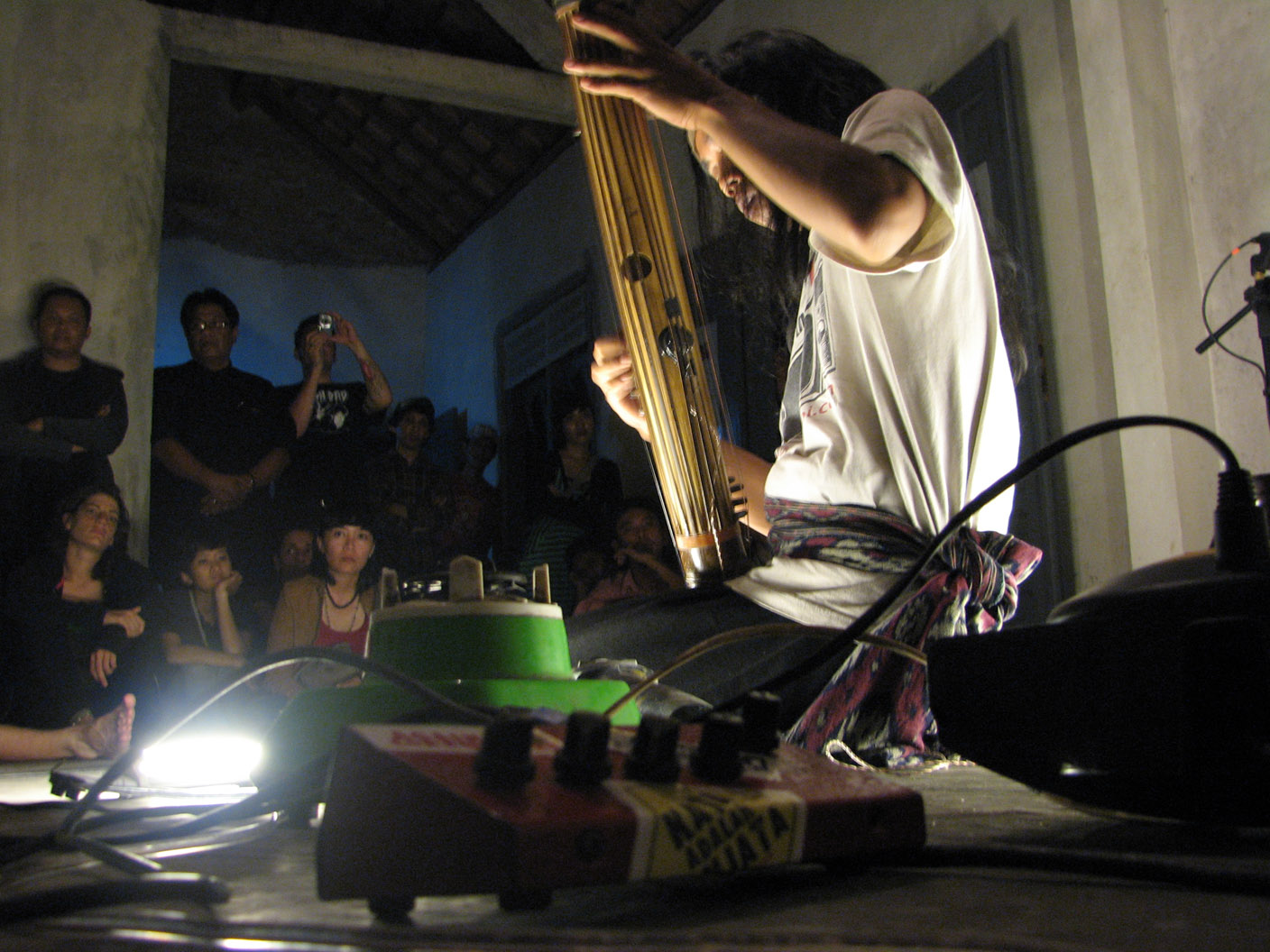 The Future Sounds Of Folk: In search of the Post-Folk

Since the beginning of 2010, I have been in Indonesia doing field work on a project I developed a year and a half prior with Steim and The UnifiedField called The Future Sounds Of Folk. The project tries to explore different ways of interpreting the past musical heritage of Indonesia with a contemporary vision and attempts to create an emerging musical movement based on the preservation/diffusion of declining and/or lesser known musical forms.

To end of the presentation, I will take the opportunity to briefly talk about a never-for-profit art space/artist-run collective focusing on the most experimental aspects of sound, video and performance art co-founded by myself and Marta Moreno Munoz called The Unifiedfield. Previously based in Yogyakarta (Indonesia), we were suppose to move into a cave in Granada (Spain) which was scheduled to open early 2011, but due to unforeseen circumstances with the local government, we are at the moment stuck in a legal quagmire that has delayed the plans for the cave. In the meantime, we are looking at alternative spaces in Granada to program what was originally planned for the cave.

The Future Sounds Of Folk – http://www.thefuturesoundsoffolk.com